Theater in the Park brings experience to young people in the world of theater.
Our musical theater workshops are designed for children to develop skills in auditioning, performing and putting together a musical theater production.  In a few rehearsals these young actors produce and perform a Broadway Musical in our own community of Severna Park, MD.
We also offer vocal and acting classes as well as summer camp opportunities.
Our staff are experienced and trained performers and educators in that live in the Baltimore/Washington area.

Theater in the Park is a "mother/daughter" business
​ in the local community of Severna Park, MD.

Jennifer Lee Kraus started on stage dancing at age 5.  Over the years she has performed in area community and dinner theaters.  Her favorite roles performed include Anita in “West Side Story” and Peggy Sawyer in “42nd Street”.  Between the ages of 15 and 30, Jennifer Lee performed, choreographed and/or directed in over 40 shows.  Jennifer Lee started choreographing as a student at Annapolis High School, then Community Theater and then on to Dinner Theater, which eventually led her to the director’s chair.  Jennifer directed at Annapolis High School from 1995-2005.
Jennifer is a full time teacher of Photography at Old Mill High School.  She also owns her own photography business called Sunset Pics Photography.  Jennifer Lee has enjoyed working with young artists over the years along with her daughters Kylie and Alyssa.  Jennifer Lee owes much of her success to her mother, Belva Jean, for taking her to all those dance, piano, vocal and theater lessons for over 20 years.

Alyssa Marie Kraus has a real passion for dance.  She started doing choreography at age 12, but started dancing at age 5.  She loves working with the Musical Theater Workshop doing choreography for the kids ages 5 - 9.  She is also part of the TITP Camp Directing Staff.  Alyssa started on stage at TITP during our first show of Elf Jr where she played the part of Santa Clause.  Some of her favorite roles have been Dragon in Shrek Jr, Michael in Peter Pan Jr., Marty in Madagascar Jr, Jack in Into the Woods Jr and really enjoyed dancing in Mary Poppins Jr.  Alyssa will be part of the Severna Park High School dance team this fall.  She loves working with her sister Kylie and has really enjoyed helping with the Spring Musical Theater Intensive. 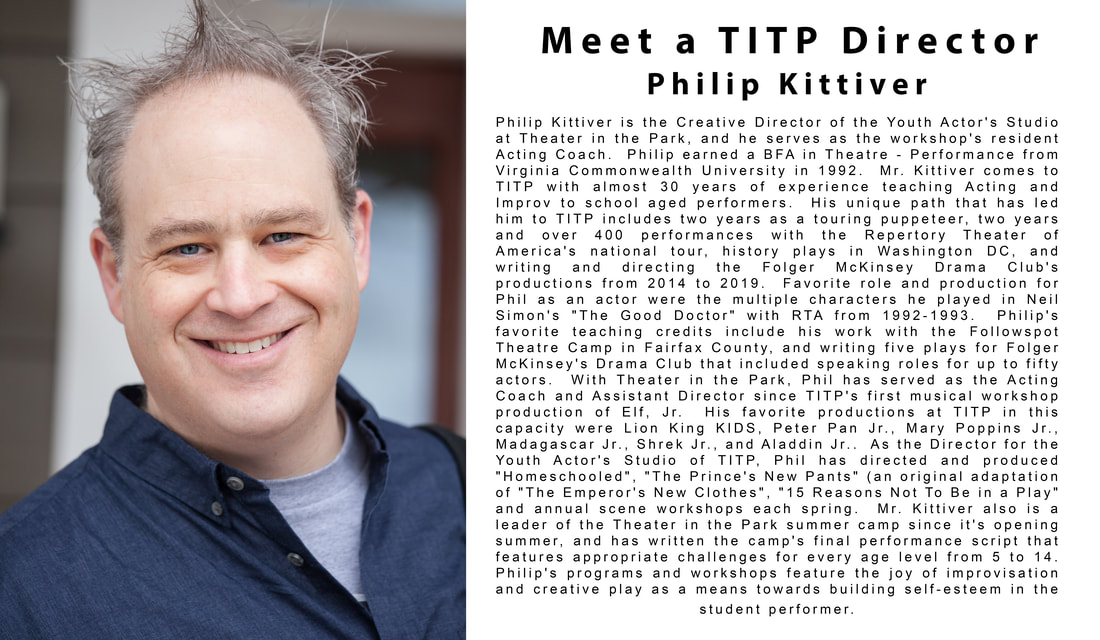